On the request of a major French refrigeration vehicles rental company, Brightec were tasked with comparing the effectiveness of BlueSeal air curtains against PVC strips to understand the benefits of switching to this method of climate control.
The tests were done in close collaboration with the customer at their location in France. For these tests, our customer made two trucks available for our use as well as driving staff that would be able to simulate the conditions of a loading/unloading scenario in practice.
The positive outcome of the tests convinced the company to start using the BlueSeal air curtains on a large scale.

For this test we are investigating how the performance of BlueSeal air curtains compares with PVC curtains in a truck. To gain a more valuable insight into these methods, we wanted to test the comparison between the two climate barriers using their real-world application in mind – so devised a range of scenarios that would reflect how goods are loaded into cargo areas.
Traditionally, climate control has been managed by PVC curtains, which suffer from a range of impracticalities in use; including being moved to one side during unloading and requiring regular hygiene maintenance. These are issues that BlueSeal air curtains provide a viable solution for by providing an invisible, obstruction-free climate carrier. This test was devised to be able to offer an accurate comparison between how the two methods measure in performance.
By studying the temperature courses in the cargo space (8.5 x 2.5 x 2.5m) of a truck exposed to external temperatures by door openings, we are given an insight into which method provides a more effective means of keeping goods cool.
In previous blogs the effectiveness of BlueSeal air curtains have been unambiguously demonstrated in a van and semi-trailer. While testing BlueSeal air curtains in a van we found a measurably better performance by BlueSeal compared to PVC curtains. 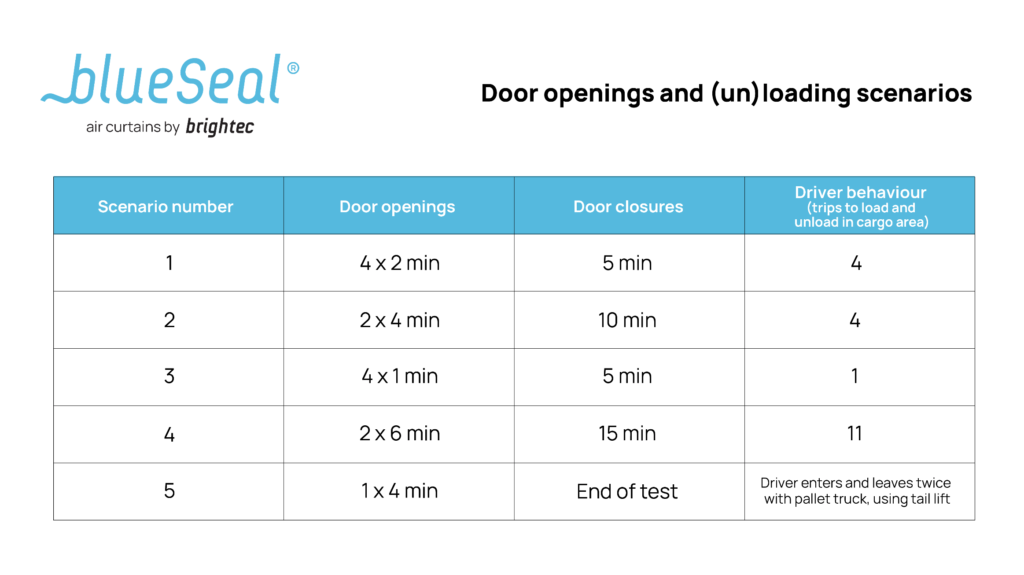 The test took place in November 2013 in the hall of a major customer in France. Two identical trucks were placed parallel and at a distance of 10 metres to each other. In these vehicles the cargo space featured dual compartments separated by an inner wall.
Both vehicles were fitted with identical cooling equipment and temperature in the hall remained fairly constant over the 6 hours of the test, between 20.5 to 21°C. Truck 1 was fitted with PVC strips and truck 2 with a BlueSeal air curtain (figure 1).
Cooling equipment in both vehicles started three hours prior to the beginning of the test to allow internal temperatures to reach -20°C before the experiment started.
To allow for further consistency, we ensured that cargo doors were opened in unison and each driver would enter the cargo area a number of times during door openings. To allow for an accurate real world comparison we used drivers from our customer’s fleet with instructions to act as they would if making deliveries in a real-world scenario. The scenarios are shown in the table.
As a result of this, in most scenarios only the right-side cargo door was opened which provided sufficient loading/unloading space. Further to this, we included scenario 5 in which a tail lift was required, both doors were opened and a pallet truck driven in and out of the vehicle twice in regular intervals.
Temperature in the vehicle was measured using an Ellitrack data logger at a frequency of 1 sample per minute. The temperature sensors (PT100 sensors) were placed 30-40cm below the ceiling and 30cm away from the inner wall between compartments. 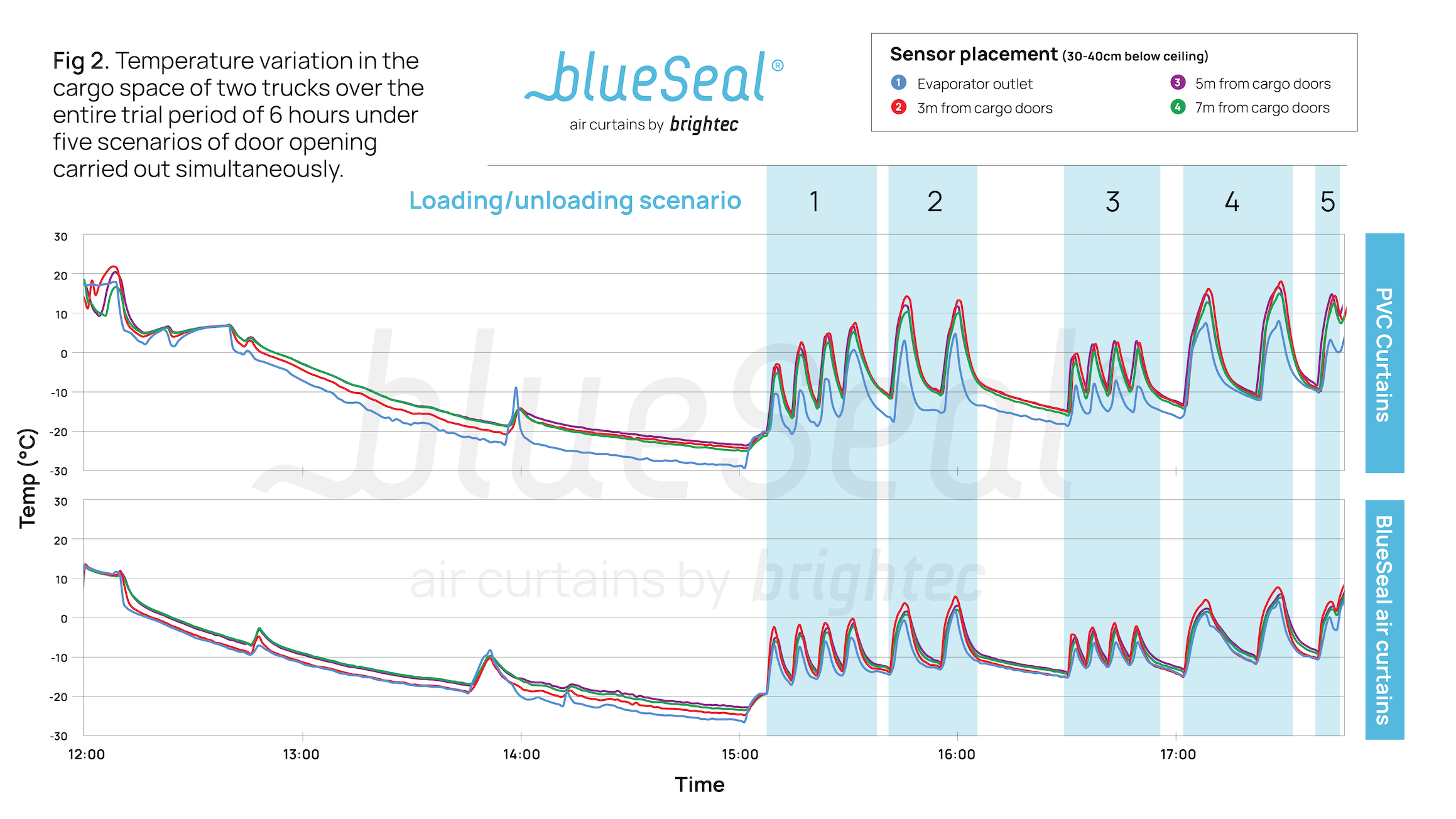 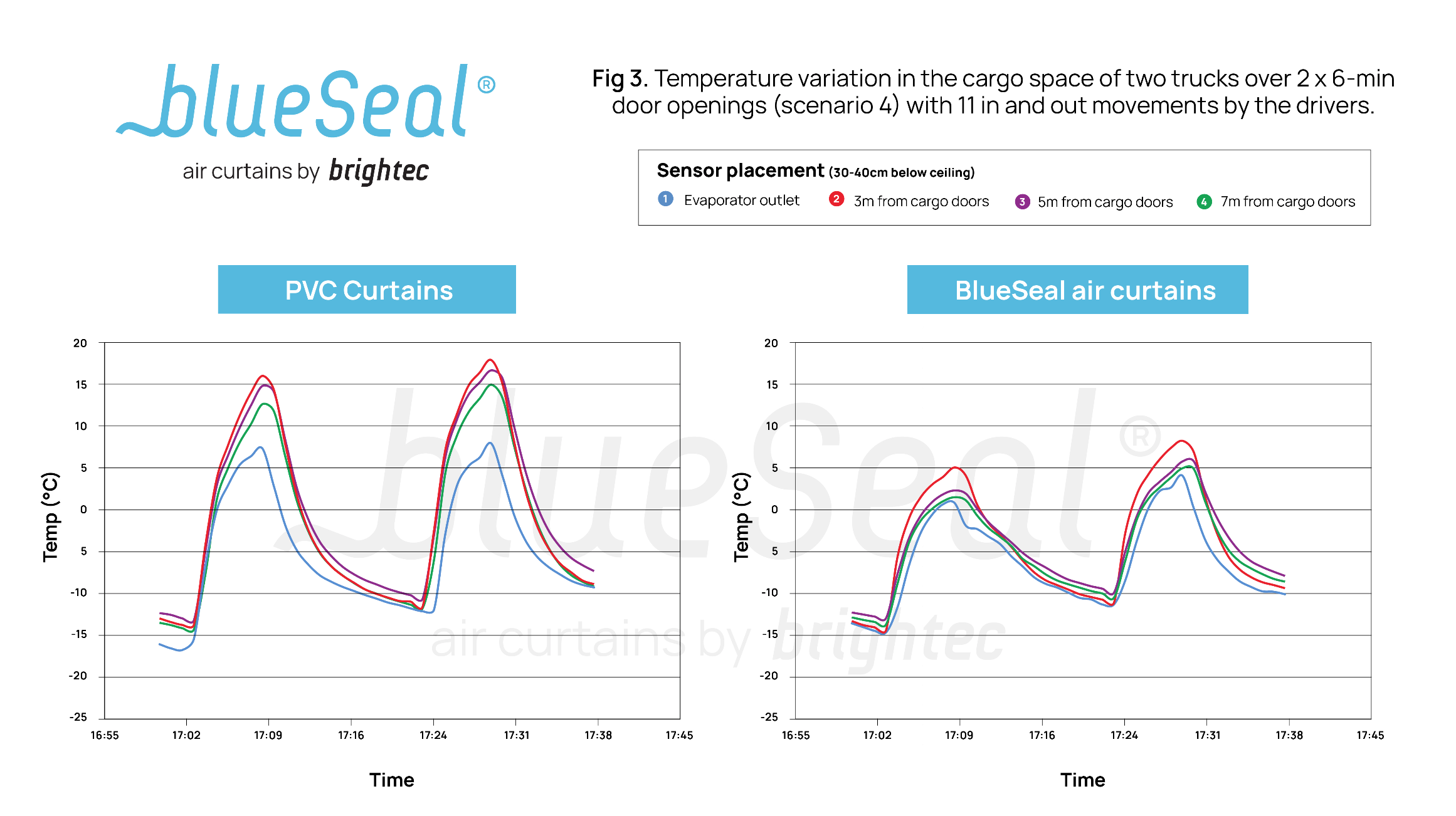 The results of the test across all 5 scenarios were conclusive that the BlueSeal air curtain provided a more effective climate barrier than its PVC counterpart – see figures 2 and 3. BlueSeal maintained an up to 10°C lower temperature during door openings in scenarios 2 and 4, the scenarios with longer door openings (4 and 6 min. respectively). This is true for scenario 5 as well in which the tail lift with the pallet truck was used.
In scenarios 1 and 3, with the short 1-2 min door openings, BlueSeal maintained up to 5-8°C lower temperatures.
In all scenarios BlueSeal shows that the temperatures in the cargo space (sensors 3 and 4) are close to each other, while sensor 2 (within 3 meters of the door) has a higher value. This is highlighted in figure 3. This corresponds to the image that a clockwise circulation occurs at the door. This circulation provides a kind of extra protective barrier for the rest of the cargo space (see also in our video).
When using PVC strips, the temperatures (sensors 2,3,4) appear to be close to each other. This indicates that the air entering near the ceiling flows unhindered forward, there seems to be no additional barrier formed by an air circulation. Of course, in the case that no barrier in the doorway is used, the air will also be able to flow forward unhindered.
In all scenarios: in the vehicle with PVC curtains the temperature measured by sensor 1 (measuring the evaporator outlet air) was significantly lower than the temperature measured by the other three sensors. This indicates that the cooling machine has a bigger driving force and operates at an increased rate. As a result, the truck featuring PVC curtains is cooled back at a faster rate when doors are closed, requiring more cooling energy (and diesel consumption) to do so.

Conclusion
Using the results from this experiment we were able to conclude that under different regimes of door openings BlueSeal air curtain offers a significantly more effective climate barrier than PVC strips with up to 10°C lower temperature monitored across all scenarios. Further to this, it is obvious that with BlueSeal a lower cooling energy consumption was required by the vehicle to maintain its internal temperature, resulting in a lower running cost for the vehicle with more effective product conservation.