Do smaller vehicles like vans benefit from BlueSeal air curtains?

In our previous test we demonstrated the performance of BlueSeal air curtains in a semi-trailer cargo space with cooling fuel energy savings of 30-40%. These initial tests led to the development of BlueSeal Original that has been well received across the food and pharmaceutical industries.

We later adapted this model to create BlueSeal Compact with a more streamlined design to allow for minimal obstruction in smaller cargo areas. Long before considering this, we wanted to examine the effects of a climate barrier in a smaller unit, and whether the same model could be applied with maximum efficiency to achieve the same results.

Typically, temperature-controlled vans have suffered from the same difficulties with maintaining a strong internal temperature in cargo bays as their larger counterparts, with the cause of most energy loss occurring when cargo doors are opened. 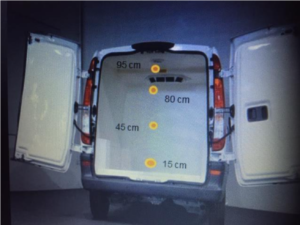 Fig 1. Cargo space of the Mercedes Vito. Locations in height are given for the 8 sensors near the rear doors and in the centre of the cargo space

To test this we used a Mercedes Vito van with an internal cargo space of approximately 4.8m³ (length cargo space 220cm, height 135cm, width 165cm) with an outside temperature of 16- 17°C. Temperature in the vehicle is regulated by a diesel cooling system (this can also be powered electrically).

Using 10 sensors distributed throughout the cargo space, we then measured air temperature in the van every 5 seconds over the course of 6 hours. The sensor locations in the cargo space are shown in figure 2.

On the first day of the tests, we monitored temperature change during a single 1 minute door opening – with and without BlueSeal air curtain.

On the second and third day, we monitored temperature change during repeated door openings with different variations on climate control – without any active climate barrier, with PVC curtains and with BlueSeal air curtains.

The centre of the cargo space was shown to be the most susceptible area to temperature increase. Without the use of any barrier our tests showed a temperature (nearest the ceiling) increase of 17°C within 1 minute, this was significantly reduced to 7.5°C using BlueSeal air curtains.

On figure 2 we can see that over the course of 1 minute door opening all temperature increases are significant lower with BlueSeal. The only exception to this occurred on sensors located on the floor near the cargo door. Using heat-mapping, this can be explained by the turbulence of the air curtain blowing ambient air downwards and hitting the floor. 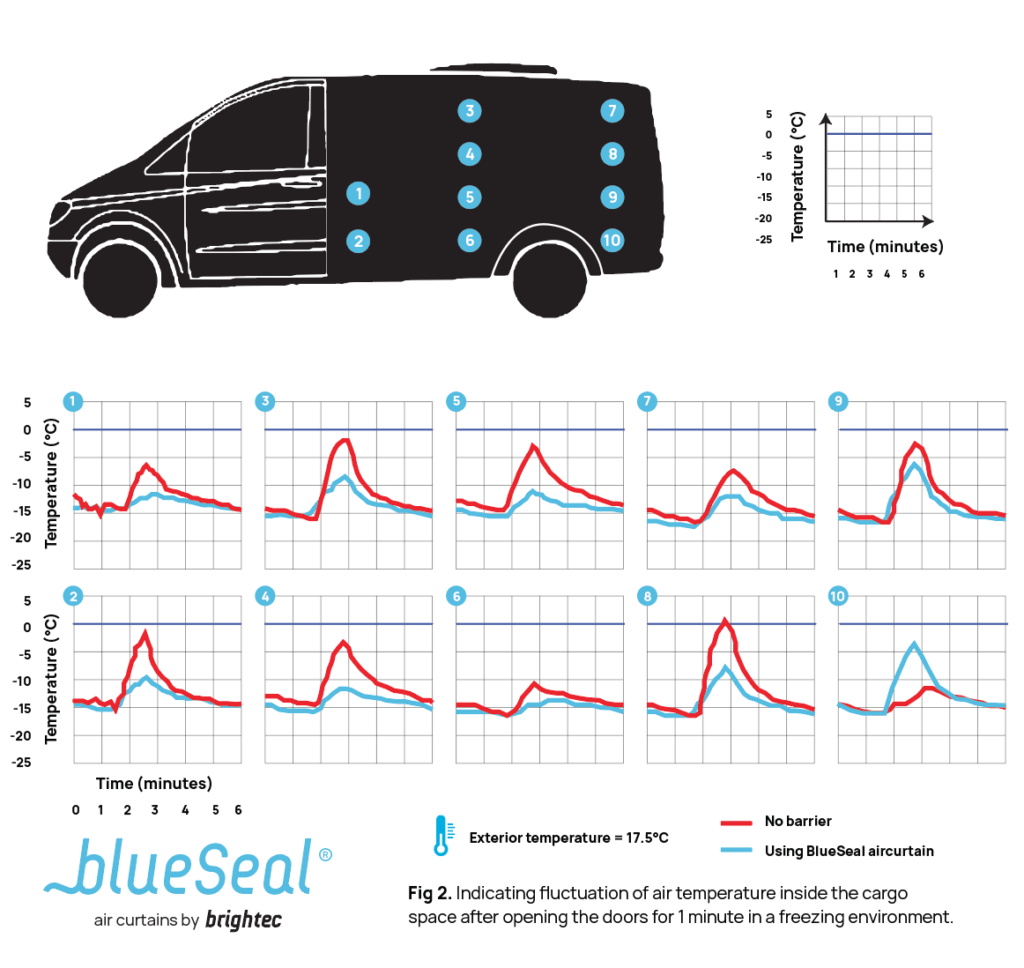 Test 3 – Repeated exposure to outside temperature

Over the course of 4 x 1 min-door openings without the use of climate barrier, the temperature at heights of 75 and 95cm in the centre of the cargo space increases within one minute 15-18°C (figure 3a). With BlueSeal only an increase of 7 – 8°C was measured. Without a climate barrier, temperature near the floor (h=15 cm) increases much less. This can be explained by the cooling capacity of the ceiling, walls and floor which enables the cooling of incoming ambient air.

After doors are closed during the tests, we can see that the temperature decline on the tests without a barrier occurs at a faster rate. The reason for this is that the cooling machine emits a higher driving force to return this temperature to normal and will require more energy to do so.

Using BlueSeal, this energy use is reduced thus the advantages become two-fold – greater energy conservation (even after the minimal energy required to operate BlueSeal) and a better preservation of inside air temperature and consequently the product itself. 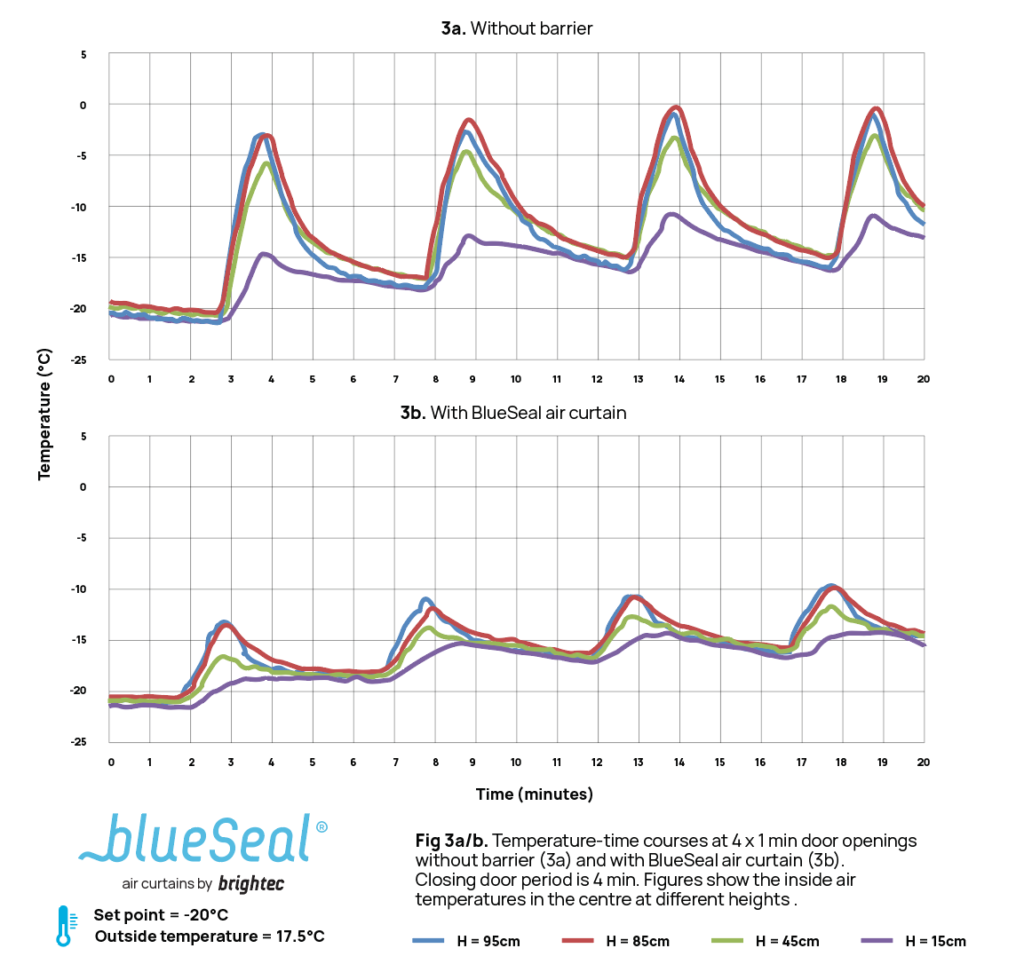 As a final test we wanted to evaluate the difference between BlueSeal air curtains and PVC strips (the traditional method of maintaining a climate barrier in vehicles). BlueSeal was developed to offer an improved method of vehicle climate control that would be less prone to user error – commonly being moved to one side during loading and unloading and reducing their effectiveness.

We saw that using PVC strips during 3 min-door openings, the air temperature would increase by 20 – 22°C in the centre of the cargo area and near the ceiling. With BlueSeal this increase was substantially less by a 17°C increase. BlueSeal air curtain seems to be more effective at controlling temperature than a physical PVC strip barrier. At a height of 15cm above the floor the temperature with PVC strips was lower (purple line). This might be explained by a substantial air flow (forced infiltration) coming into upper part of the space, the air flow cooled down and leaves the space just above the floor. With the air curtain there is hardly any air flow near the floor leaving the space but there seems to be a circulation. Because of this circulation in this relative small space temperatures near ceiling and floor become similar. 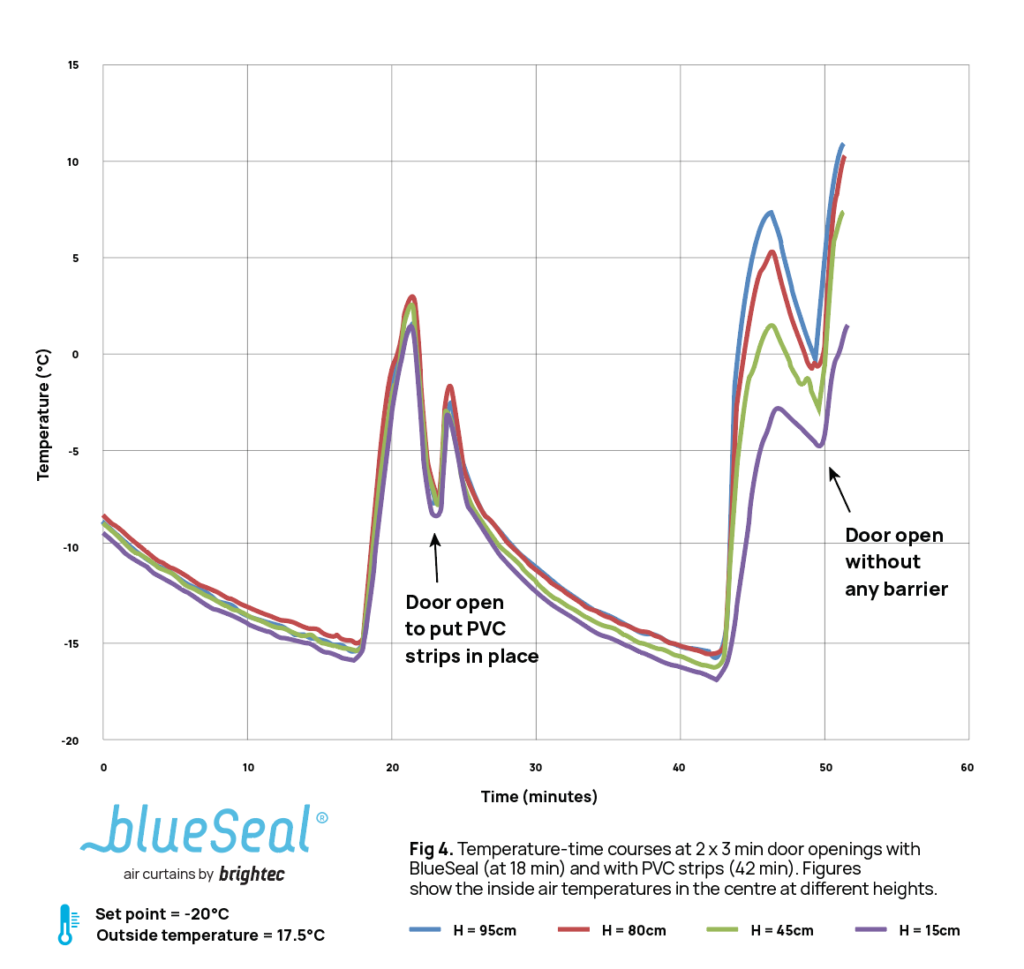 Through these tests, we can safely conclude that BlueSeal air curtains also perform excellently as a method of climate control in relatively small cargo spaces. Whether there are single or repeated door openings, BlueSeal significantly maintains the integrity of the inside air.

During repeated door openings the cooling machine was able to work in harmony with BlueSeal to maintain the temperatures of the cargo space. Without any use of climate barrier, air temperature air will increase drastically and as a consequence product will be exposed at ‘hot’ air in comparison to the desired low temperatures.

We also saw that PVC curtains proved less effective than BlueSeal at maintaining cargo temperature. Our tests help to demonstrate the critical function that an effective climate barrier provides in refrigerated transport. Food and pharmaceutical products in particular are more at risk of spoiling when their integrity is compromised by outside temperatures.

By providing a consistent and uninterrupted barrier, BlueSeal helps to keep the cold chain intact in a method that is hygienic, user friendly and beneficial to the energy costs of existing cooling equipment.

As a result of these tests performed in 2013 BlueSeal was developed into a fully-fledged product and has been adopted by operators around the world as one of the leading methods of vehicle climate control. We have also encouraged further independent tests from leading institutions in energy-efficiency and food distribution that have supported our initial findings and are proud to stand behind BlueSeal as the future of cold chain management.